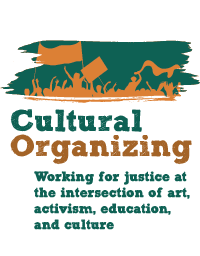 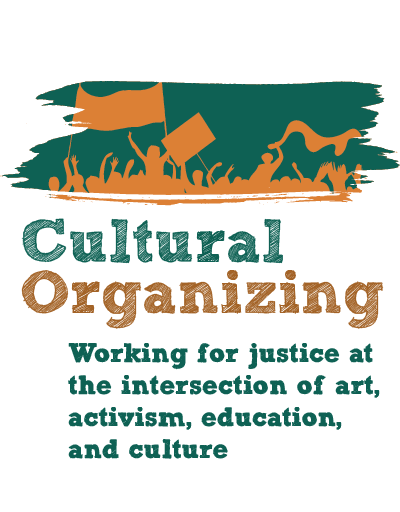 Where is the Power? Creative Power Analysis and the Arts

This is Part 4 of a series on Art and Power

Where is the power? That’s the question at the core of a power analysis, one of the most useful tools that community and movement organizing have today. While it can look different across organizations, a power analysis basically charts out the power relationships relevant to a campaign, an issue, or a movement. A controversial pic of Obama teaching about Power Analysis, much attacked by the right.

A youth organizing group taking on discipline policies in schools, for example, might gather together and map out who really holds power over discipline policies. Can the principal change them on her own? Is it mandated by the district? Is it a state government matter? What outside forces are supporting the current policies? Who funds them? These questions help the organization to choose allies and targets. On the flip side, power analysis can be done on ourselves. What kinds of power do we have? Where does our power come from? How is it best used?

Cultural organizers and arts activists may struggle to answer these kinds of concrete questions, as we work in the realm of culture and are often taking on invisible forms of power. But there are a few methods that I’ve run across that could be helpful in this regard.

One of the most comprehensive frameworks to help groups do power analysis is that developed by John Gaventa at the Institute of Development Studies, building on the work of many organizers and academics. It is called the Power Cube, and it breaks down power across three axis: levels of power (global, national, local, household), spaces where power is exercised (closed, invited, and claimed) and forms (visible, hidden, and invisible). The power cube helps us to look not only at formal decision making, but at the cultural and psychological aspects of power — key to the work of cultural organizing. This tool has been used by groups around the world, and you can find an interactive explanation and many examples at the power cube site.

Another fabulous process is narrative power analysis, developed by SmartMeme and outlined in their book Re:Imagining Change. This analysis can help groups who want to shift the cultural discourses around their issues as a key part of addressing injustice. First groups analyze the current narratives that are helping to maintain the status quo by making injustice seem normal, inevitable, or justified (for example, the narrative of meritocracy and “pulling yourself up by your bootstraps” helps to justify poverty). Next, groups figure out where these narratives are weakest — for example where they contain unstable contradictions. Finally, groups build new, truer stories meant to challenge, subvert, or replace these dominant stories. This is part of SmartMeme’s “story-based strategy.” While such a strategy doesn’t need to involve art per se, it is inherently cultural in nature, and quite in line with the goals and principles of cultural organizing. Finally, Augusto Boal’s Theatre of the Oppressed (TO). I was trained in these techniques in college, and was fortunate to attend a workshop with Boal before he passed away. Boal saw the possibility that theatre could be, if not the revolution, then “rehearsal for the revolution.” As a method of power analysis, TO is particularly good at addressing very personal and internal forms of power. TO brings people together to explore how oppression functions in their lives, and how they might confront it, by quite literally performing different possibilities. It starts not with big ideas — racism, homophobia — but with their everyday manifestations. Through image theatre, forum theatre, and the largely internal rainbow of desire, we can come to better understand — cognitively, emotionally, kinetically — what forces shape our lives, and what power we have to create real change. Relationships between urban schools and parents have long been troubled by misunderstandings, fear, and racism. Latina/o parents, for example, are made unwelcome in schools that do not make space for Spanish speakers, that hold negative assumptions about parents’ abilities, and that remain alienated from the communities in which they reside. In response, the last 20 years have seen a massive increase in parents and communities of color successfully organizing to reform schools. Many have fought for and won the creation new schools, in order to change these long-standing patterns.

But what happens after the win? Once a new school is founded, how do parents, teachers, and community members negotiate the complicated terrain of designing and running a school? In Mothers United, Andrea Dyrness takes an in-depth look at this process through rich critical ethnography and participatory research with a group of Latina mothers. What she and the “Madres” discover is that the organizing win is only the beginning, and relations of domination and colonialism seep into even the most well-meaning school-community partnerships.

Madres Unidas takes place in Oakland, CA, at a time when years of organizing have led to the founding of a series of “small schools.” Dyrness recounts how she gathered a group of mothers involved in founding one of these small schools, and initiated a participatory research project under the name “Madres Unidas” or “Mothers United.” The book documents the Madres collective as they collect and analyze data about the school, build caring relationships with one another, and use their new understandings to advocate for true parent voice in their school. Dyrness embeds the story in theories of third-world and critical Latina feminisms, allowing her to take a critical look at the power relations in the school design process.

A central argument of the book is that, while both teachers and parents supported the small schools, they came to the work of designing and running a small school with vastly different assumptions and understandings. Parents saw the school as the result of their community activism, and thus as a space where their voice would be recognized. Teachers, long inhibited in their professional work by the bureaucracy of the public schools, thought of the school as a way to realize their professional goal of a more progressive curriculum and pedagogy. Even the term “social justice,” a part of the new school’s mission, meant vastly different things to teachers and parents. While teachers espoused “social justice” in the big-picture sense, parents saw it as a matter of the specific, real-world needs of the community.

Underlying these misaligned viewpoints are fundamental assumptions about the roles parents should play in schools. Using a concept from sociologist Patricia Hill Collins, Dyrness argues that parents were trapped by “controlling images,” or stereotypical representations. For example, in the narrative of the school design and governance, a “good parent” was one that followed the lead of the education professionals, who presumably knew best. Any other behavior — like the demands for more voice from the Madres — was seen as a sign of a “bad parent” or “problem parent.”

This critique extends to the initial community organizing campaign as well. The campaign is portrayed as politically successful and empowering for many parents. Still, Dyrness argues that the campaign fell prey to its own “controlling image,” that of the “angry parent” demanding change. In none of these three roles — good, bad, or angry — are parents seen as experts, people who have vital perspectives and knowledge that are necessary in the creation of a successful community-based school.

In the end, as the Madres discover, this leads to a situation in which the school espouses a commitment to community and parent involvement, but struggles to make this vision a reality. This book suggests that participatory research — in which parents take on the role of researcher/activists — offers a route to critiquing and changing power imbalances between teachers and parents. It also advocates the creation of “counterspaces,” private spaces of trust building and mutual support from which research and activism can sprout — in this case the kitchen of one of the members.

Throughout the book, Dyrness offers a stunning example of what critical ethnography can look like. The descriptions are rich and thick, drawing the reader in and offering ample support for her arguments. It is this depth and detail that makes me believe in her findings, even when it goes against some of my own biases as a supporter of community organizing. In addition Dyrness shows great compassion for the teachers even as she critiques their actions — the villains in the story are not individuals so much as systems of power.

I find that Dyrness draws too stark of a line between organizing and participatory research. This book needs to be understood in the context of the incredibly diverse field of community organizing. While in this particular situation the goals of participatory research butted heads with those of the organizing group, many community organizers have found that participatory research and organizing can go hand in hand. But with that caveat in mind, this book should serve as a cautionary tale to organizers and school reformers that it is not enough to “win” a reform. Close attention to issues of race, class, and power throughout the implementation process is a necessity if collaborative, empowering relationships are to be sustained.

A Match on Dry Grass I am proud to be announcing the publication of A Match on Dry Grass: Community Organizing as a Catalyst for School Reform. Based on case studies of six strong community organizing groups from across the country, this book gives a deep and nuanced look at the underlying processes involved in building power among parents, youth, and community members, and leveraging this power towards educational justice.

The current national dialogue on school reform — with its focus on choice, testing, and market-based reforms — has left little room for the voices of the students, families, and communities that are most directly affected by education policies. At the same time, a growing movement of communities most marginalized by the current system — low income communities of color — are demanding and winning a say in how schools are designed and run. They are collaborating with educators, founding their own schools, increasing funding streams, addressing issues of racism and school violence, enhancing teacher quality, and integrating families and community members into schools as equal partners. Education is a key aspect of organizing to improve and empower communities, and community organizing is indispensable to the effort to create an equitable and just public school system.

For the past four years I have been fortunate to be a part of a research collaborative made up of fifteen graduate students and two faculty members. Breaking from the traditional research mode, in which graduate students are seen as assistants, we made all our decisions collectively, from research design to writing. Along with two of my colleagues, Mandy Taylor and Helen Westmoreland, I got to work with the Northwest Bronx Community and Clergy Coalition (NWBCCC) and their youth-led affiliate, Sistas and Brothas United (SBU). It’s an understatement to say that I learned a lot from these powerful organizers and community leaders. We did our best to capture their deep knowledge and expertise in chapter seven, Cement Between the Bricks.

To learn more about the book, you can visit our website: http://mark-warren.com/matchondrygrass.org