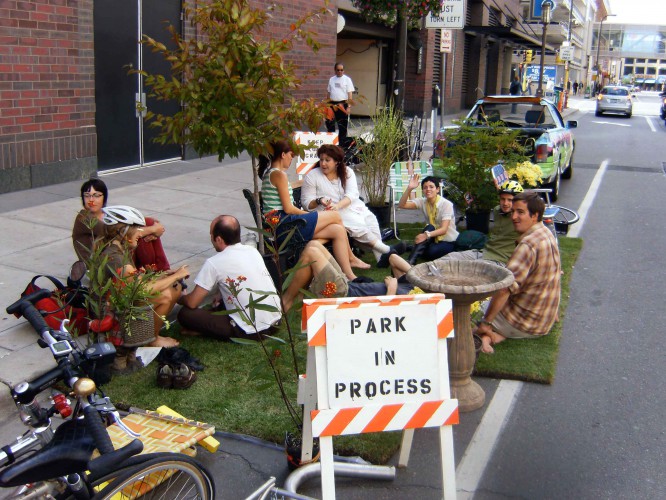 Today is PARK(ing) Day, when metered parking spaces around the world are transformed into parks as part of a global challenge to rethink how we use public space. In honor of PARK(ing) day, I want to share a hot-off-the-presses case study from the people at Beautiful Trouble. For the full BT experience, visit http://beautifultrouble.org

When: Began October 2005 and now occurs annually on the third Friday in September

Imagine you are walking down a busy city street. Cars zoom by, walkers navigate narrow and dirty sidewalks, and drivers vie for precious parking spots. Then you come upon a park. But this is not a typical city park. It is a mini-park, slightly longer than a car, nestled in a metered parking spot. You take a moment to sit down on its single bench. Perhaps you chat for a moment with another curious passerby. Or perhaps you simply think about the questions this little park raises, such as: Why is there so much space in our cities for vehicles and so little for public gathering? How might we redesign our urban spaces to make them more convivial and humane?

This concept — a park in a parking spot — was the brainchild of Rebar, a design studio working at the intersections of art and activism. It became the initial spark for PARK(ing) Day, a worldwide movement to challenge and repurpose urban space by temporarily transforming metered parking spaces into public parks. The first PARK was erected in downtown San Francisco in October 2005. Rebar filled the meter with coins and thus effectively rented a seven by twenty-two foot curbside parking space in downtown San Francisco. They rolled out sod, added a potted tree, put out a bench, and created a temporary park for several hours.

The PARK capitalized on San Francisco’s legal code, which did not specifically state that parking spaces be limited to use by private vehicles. Co-organizer Blaine Merker described this performance installation as a “creative repurposing of familiar elements to produce new meaning,” using principles such as creative adaptation, absurdity, innovation, and beautification to change the way we think about metered parking spots and urban space more generally.[1] No longer just places to park automobiles, PARK(ing) spots become rentable public spaces, “temporarily expanding the public realm and improving the quality of urban human habitat, at least until the meter ran out,” as Rebar’s website put it.

Following the initial installation, a picture of the PARK in San Francisco was quickly disseminated through various electronic media. It became what’s known as a “sticky” idea (see The Tipping Point by Malcolm Gladwell and Made to Stick by Chip Heath and Dan Heath). After seeing the circulated image, people from all over the world contacted Rebar to find out how to stage a similar event. In response, Rebar chose the third Friday in September as “PARK(ing) Day” and, starting the following year, encouraged people to make their own playful and transformative PARK(ing) performances. PARK(ing) Day adopted a creative commons license and encouraged an open source ethic, so long as participants limited their events to the specified day and followed a few simple guidelines. PARK(ing) Day has thus become an international movement reaching hundreds of cities across the world. The initial PARK has become a meme that can be adapted to local situations, and used to raise awareness about a variety of issues facing urban residents.

The PARK(ing) Day movement has also resulted in more permanent changes in urban space. Several cities have created permitting processes for the creation of enduring “parklets.” For example, a parklet on 9th Avenue between Irving and Judah Streets in San Francisco’s inner sunset neighborhood provides several benches so passersby and patrons of nearby bakeries and shops can stop, take a rest, and question how we use urban space.

PARK(ing) Day works because it enacts or prefigures what it professes (see TACTIC: Prefigurative intervention). Instead of just talking about how urban space could be organized differently, PARK(ing) Day lets us experience a living example. It plays on the word “park” to perform a temporary disruption of the usual meaning of parking spaces (and the automobile-centric use of much urban space), instead highlighting the second meaning of park in an engaging and memorable way. If someone encounters a PARK, she can’t avoid noticing it. Even if she sees one of the thousands of photos of PARKs that circulate online it can potentially change forever how she sees “parking” spaces, while opening the door for her to rethink public space in general.

PARK(ing) Day doesn’t just complain about or protest car culture, it offers the public a positive, participatory way to experience a more human-scale and convivial use of public space, prefiguring the positive change it seeks to bring about. Who knows what exciting initiatives might come about thanks to the efforts of par(k)ticipants inspired and excited by all the ways a parking space could be put to use!

Although détournement is most often used to describe the playful hacking of mass media, it can also be used to alter the meaning of a particular space or place. PARK(ing) installations subvert the normal use and understanding of parking spaces, and with the help of a pun on the double-meaning of “park,” suggest that every parking spot is just a PARK waiting to happen.

In its PARK(ing) Day manual, PARK(ing) Day warns potential participants, “Remember, you are not protesting.” Importantly, they encourage participants to build temporary open spaces in which any passerby will be welcome to take part. Even though PARKs radically repurpose urban space, they do so by offering a fun, welcoming, and legal opportunity for everyone to participate.

PARK(ing) Day is an open-source movement that calls on participants to adapt the form however they see fit, in keeping with the event’s creative commons license. The PARK(ing) Day website provides participants with tools to achieve their own vision as opposed to telling them what a PARK should be.

PARK(ing) Day uses temporary parks as a way to reframe conversations about the use of public space. PARKs call our attention to the dominant frame of a car-centered mode of urban design and allow participants to envision alternative frames.

Danielle Endres is a professor of rhetoric and argumentation at the University of Utah. Her teaching and research examines discourse (verbal and nonverbal), persuasion (rational and irrational), activism, and social movements. Her research investigates climate change activism, Native American activism, and environmental justice. When not performing her day job, Danielle spends the majority of her time trying to encourage radical thinking and an expanded sense of the possible in her two young kids. 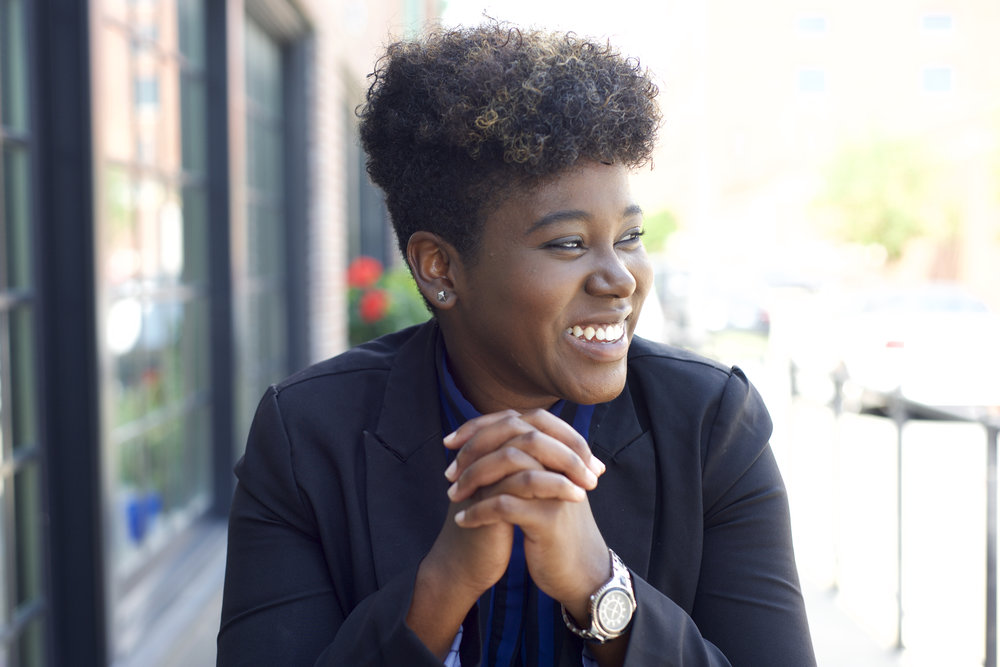 Interview with a Hip-Hop Ambassador (Part 1)

Interview with a Hip-Hop Ambassador (Part 2)